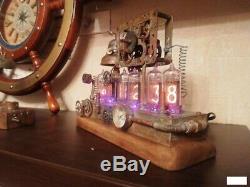 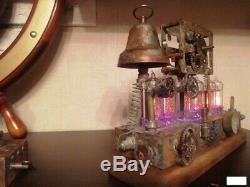 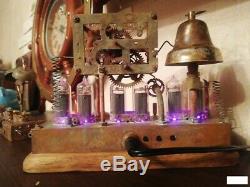 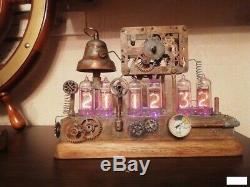 Vintage watches on gas-discharge indicators in-14. Year of release: 12.2018. Lamp (zip) 1976 new from the store. The supply voltage is 5V, from computer, charging or laptop. USB power cable as a gift.

Retro watches, nixie clock, vintage USSR, Soviet. The name Nixie comes from the abbreviation NIX 1 - Numerical Indicator eXperimental 1 (experimental digital indicator, development 1). The name was assigned to the entire line of such indicators and became a household name. In particular, the Soviet indicators IN-14 in foreign catalogs are recorded as IN-14 Nixie.

It is clear that it is quite difficult to control such an indicator, and the absence of a mesh anode that does not allow metal particles sprayed from the cathodes to the front wall of the balloon led to its rapid turbidity. The Inditron was forgotten, and the gas discharge indicator soon had to be reinvented. Survived unusual devices quite a bit. If desired, not only a clock, but also a calendar can be performed on gas discharge indicators. In recent years, the popularity of discharge indicators has increased due to their unusual antique look. Unlike LCDs, they emit soft neon orange or purple light.

To UNITED STATES OF AMERICA. Asia and Europe and Oceania.

We do not mark merchandise values below value or mark items as "gifts" - US and International government regulations prohibit such behavior. We are a trading company providing excellent service and quality. These watches were collected under a special order and presented in a piece. The item "Retro Nixie Tube Clock on Soviet TubesIN-14 Vintage Hand Made SteamPunk Clock" is in sale since Tuesday, September 17, 2019.