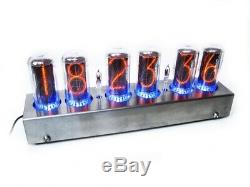 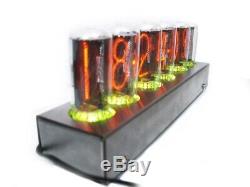 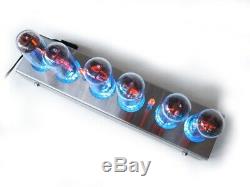 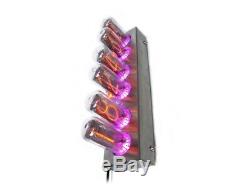 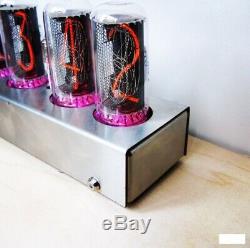 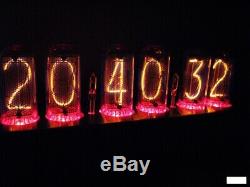 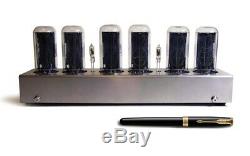 Gas-discharge lamp clocks from the past. Lamps are not produced for more than 30 years and have become a rarity. A great solution for an unusual gift that will be appreciated and will constantly remind you of the dac. Volumetric figures of glowing gas look fascinating. Made of natural beech and polished stainless steel.

Powered by a 12 volt unit that comes in the kit. The clock Has a switchable multi-color backlight that changes smoothly. The name Nixie comes from the abbreviation NIX 1 - Numerical Indicator eXperimental 1 (experimental digital indicator, development 1). The name was assigned to the entire line of such indicators and became a household name. In particular, the Soviet indicators IN-14 in foreign catalogs are recorded as IN-14 Nixie.

From the early 1950s to the 1970s, indicators built on the gas discharge principle were dominant in technology. Later they were replaced by vacuum-luminescent, liquid crystal displays and LED indicators and have become quite rare today. Currently, most gas discharge indicators are no longer being produced. Some researchers believe that about 10 years before the invention of the Nixie tube type indicator, a similar design device called the Inditron was developed. The authors of this invention made a mistake by not using a separate anode at all. In order to illuminate one or another cathode digit in such an indicator, it was required, as in a conventional gas-discharge indicator, to supply a negative potential. But the positive potential was applied to the next figure - it became the anode for a while. It is clear that it is quite difficult to control such an indicator, and the absence of a mesh anode that does not allow metal particles sprayed from the cathodes to the front wall of the balloon led to its rapid turbidity. The Inditron was forgotten, and the gas discharge indicator soon had to be reinvented. Survived unusual devices quite a bit. If desired, not only a clock, but also a calendar can be performed on gas discharge indicators. In recent years, the popularity of discharge indicators has increased due to their unusual antique look.

We are a trading company providing excellent service and quality. These watches were collected under a special order and presented in a piece. The item "Retro Nixie Tube Clock on soviet tubes IN-18 a wonderful gift for a loved one" is in sale since Tuesday, September 24, 2019.